If you have ever tried grocery shopping with a dietary restriction (Gluten free, Dairy free, Plat based diet, Vegan diet, Low sodium diet, Low in sugar foods, Fodmap diet), then you know how challenging it can be to find the right foods to eat. Reading product labels can be tricky, and the messaging is often confusing. With Tinga, it couldn't be easier. We help you curate nutritionally rich grocery lists, tailored to your dietary requirements, and make it easier to understand food labels. Tinga enables you to shop smarter for your family's dietary lifestyles. You can think of Tinga as your nutritional shopping assistant - here to help you shop for food with confidence, making it easier to change your long-term eating behaviours for the better! #Leanontinga

Our passionate team of experts created Tinga simply to help you make faster and healthier food choices that match your dietary needs. We’re using our uniquely designed tech to celebrate the power of food and inspire personal well-being. Tinga’s interactive nutrient guide understands your unique preferences and helps you easily swap in healthier food options at your own pace. Our users are our #1 priority – that’s right, you! Our sole purpose is to empower your healthier food choices by reinforcing positive behaviours. We’ve built Tinga to meet you right where you’re at in life – rather than ask you to adapt to Tinga. If you’d like to read our Founder’s story, you can do so right here. 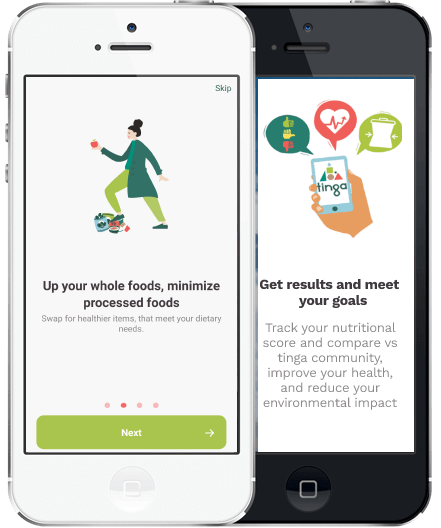 We’re proud of the innovative features we’ve created specifically for Tinga –
and bet you’re going to love them, too.

Tinga remembers your dietary selections and saves you time. Save time with easily set parameters across your favourite available retailers. We support many different lifestyles like Gluten-Free Diet, Diary-Free Diet, Vegan Diet or Low FODMap Diet, empowering your health and planet-friendly choices.

Many modern foods (even those marketed as "healthy") feature an abundance of nutrients like trans fats, saturated fats, sodium and sugar which can negatively impact our health if we enjoy them too much. Lean-on-Tinga's sliding filters, so you can focus on what's best for you and your family (e.g. Looking for "Low Sugar Foods," reduce sugar limit below 15% per serving).

Tinga has created an online forum for users to connect, share and grow. Whether it's sharing amazing product recommendations or discussing your current challenges. Our community was built for users who enjoy connecting with others and sharing their experiences.

Tinga rates fresh whole food choices as 'On The Plate' and processed foods as 'Off The Plate' and then uses these to generate a total basket score (this can be found in your grocery list plus your user profile). The goal is simple: achieve a Plate Weighting score that's more green than red!

Tinga converts nutritional data into our Thumb Rating System. This handy scoring visual helps your quickly identify the nutritional value of your food choices. Even better, it shows you how to upgrade to similar healthier options. It's a fantastic feature for swapping out less nutritious items for more nutrient-rich items.

Tinga also delivers plate weighting based on Produce, Whole Grain, Protein, or Other. Visualizing your shopping list identifies areas of opportunity, improves purchase choices, and results in a healthier, happier you!

The thinking behind Tinga

Tinga makes it easy to find healthy foods in nearby stores that meet your dietary needs and social choices.

Shop by category or item, then add products to your grocery list.

Our unique online tech boosts your shopping confidence (and saves so much time) by combining retailer stores, products, pricing, ingredients, and each item's nutritional content in one convenient location.

We help you create a balanced shopping list to optimize your eating habits, while making more sustainable choices for our planet.

Our nutritional guidance helps supports your health needs. First, we determine whether an item is a fresh whole food or not (Yes = On the Plate, No = Off the Plate). Next, we look at the product’s nutritional values, specifically how many positive nutrients vs negative nutrients. All fresh whole foods start as green thumbs and can move to yellow or red depending on the impact of the negative nutrients. Processed packaged foods start with a yellow. We also use ratings in the background to help provide swap-ups recommendations, which appears on your screen as a green, yellow or red thumb. Packaged and highly processed foods with little to no nutritional value get red thumbs and should be enjoyed in moderation.

Our team has 80+ Years of Combined Industry Experience

My passion for Tinga stems from my personal experience of navigating our food system with a dietary constraint. It’s a real struggle to eat healthily – and I know I’m not the only one who feels this way! My same struggle is apparent on a mass consumer scale. It became clear to me that there was an opportunity to do things better, and that resulted in Tinga. I’ve gathered a team of individuals who feel the same as me and together, we are working to change how the food industry approaches healthy eating. My dream for Tinga is to instill enough self-empowerment in our user base so that we can drive significant, positive change within our food industry.

I believe that everyone should have the ability to easily find great-tasting healthy food options that meet their nutritional needs. As someone who bought healthy, nutritious foods before it was a trend, and who suffers from food allergies, Tinga’s cause is near and dear to my heart. I am passionate about making it so that getting customized nutrition is no longer a complicated effort

The practice of healing through nutrition is my greatest passion. As a Registered Dietitian, my life's work involves helping others rediscover the joys of food, feel good about their dietary choices, and achieve their best possible health. Healthy eating doesn't have to be complicated, and my philosophy is simple: fuel your body with great food as part of a healthy lifestyle to enjoy a higher quality of life!

I’m a nutritional scientist with a PhD Ph.D. who has worked in the food industry, for NGOs, and in academia. I’m passionate about helping people eat better and working on projects that help make our food systems more sustainable and inclusive. On a personal note, I am a keen traveller, animal lover and LOVE to food shop – not to mention eat!

I've been on a journey to eat healthier without compromising taste or needing additional supplements. The biggest change to my mindset was understanding that each meal is an opportunity to nourish my mind and body. Tinga has equipped me with the necessary fundamentals to achieve my goals and do so in a sustainable manner. I believe Tinga complements my values and supports my vision of how to live a healthier lifestyle.

Rob, our founder, grew up in alpine ski racing and had the awesome opportunity to travel the world following this passion. And wherever his skis took him, you can bet that he was sampling the wares of the local bakeries. Yet Rob was unaware that this second, rather carb-heavy passion of his would come back to bite him.

In his mid-20s, Rob began an 8-year health struggle, experiencing worsening discomfort and pain each day until being diagnosed with an intolerance to gluten. Having never known this was a thing, Rob was crushed to discover 90% of everything he ate – including his beloved pastries – was affected.

Rob’s path to gluten-free culinary paradise was far from smooth, and his grocery bills increased significantly – but he eventually found his new way. Then, after Rob and his wife Kylie, had their daughter (our app shares her nickname!), they experienced a new wave of diet eliminations as Kylie was affected by a rare vasculitis disease called Bachet's, brought on after childbirth.

What followed was years of food elimination as Rob and his family tried to stick to certain diets confirmed by the careful reading of product packaging when food shopping. And after searching for an easier approach, Rob decided to create his own.

In Tinga, Rob and his team created an easier way to support shopping for individuals and families with special dietary needs. And his family will be the first to say it really works!

“Our bodies go through changes every number of years, changes that require supporting shifts and realignments in our diet and lifestyle. Tinga is a recognition of those pivotal moments in life when our bodies undergo a significant change that affects how we eat.”
- Rob

The Tale of Tinga

“We used to call our daughter ‘Tinga’ after ‘Tinga Tales’, a cartoon that she loved. She represents to us that pivotal moment in which you must change something about your way of being for the sake of your health. Whether it’s having a child, a health scare or reaching a milestone age, Tinga is a solution to making that transition easier for all.”
- Rob & Kylie